It’s not too late to fit in a summer camping trip. Karen Green recently packed up her family for a quick camping getaway at Kelso Conservation Area that left her kids saying, “S’more please!”

Family Fun in the Heart of Ontario: Kelso Conservation Area

KAREN – As far as I’m concerned, there is little reason to leave Canada in the summer. Unless constricted by schedules (or feted with opportunity), staying close to home in the beautiful, brief, hot summer months is the payoff for dealing with the long, brutally cold, depressing winters. Forget Florida in July. I want the shady forests and cool lakes of Ontario.

With this in mind, we recently hit the road on a sunny Saturday morning, en route to Kelso Conservation Area in Milton for a weekend of adventure, nature, and perhaps even a reprieve from the heat wave that had been blanketing Southern Ontario.

Kelso (better known as Glen Eden during ski season) was once a busy lime quarry, but is now a tidy gem of green space less than 90 minutes from the GTA. As an expat Torontonian, I’m sad that I hadn’t known about Kelso prior to moving away, as it really is the perfect family escape from the city.

On tap for us was a day of canoeing, swimming and exploring, followed by a night of camping and a second day devoted to hiking the stunning Niagara Escarpment. The only thing we were concerned about was whether we had remembered the Frisbee. We tried not to think about the ominous dark clouds gathering above us.

The park is very heavily used as a day spot for picnics, parties and reunions, so our wait in line to drive into the park was immediately tempered by the happy energy inside the grounds. Kids and families everywhere, the nearby highway was completely drowned out by laughter, music and the sounds of people having fun. Summer sounds. The amazing thing was, as soon as we launched the canoe from the boat dock, all of that melted away. The lake, though small, was serene, calm, and pretty. We had a humourous debate over whether or not I was actually capable of steering the canoe, having jumped into the back position, which, it turns out, I was not. Then, as we rowed in circles for a few minutes, my big, floppy beach hat flew off my head, which for some reason greatly alarmed my six-year-old. Thanks to my inability to steer the ship, we watched it slowly, slowly sink into the depths of the lake before we could manage to get to it. Thank you to the people on shore who were pointing at my sinking hat and yelling for our attention as I rowed us in circles away from my chapeau.

Once we figured out the whole steering thing, our canoe ride was bucolic. Although, not for my six-year-old, who had no faith in our ability to keep her out of the water after what happened to the hat, and cried the entire time. But this is no fault of the lake’s.

Eventually we headed back to shore, Chris and I high-fiving over our awesome sea-faring abilities. Six declared she was never getting into a boat with us again. I’ll remind her of that if we ever think of taking another Disney cruise. We spent the afternoon on the sandy beach, making castles, swimming and snacking. At least, that’s what the kids did. I indulged in my favourite public activity, people-watching. Fascinating. Everybody was having a great time. There was a family self-defense lesson taking place in the shallow water, which I admit I at first mistook for a group baptism, and there were a lot of pregnant women in bathing suits that were cuter than the one I was wearing. Maternity fashion has come a long way.

Once the kids were waterlogged, we headed back to our campsite to make dinner. Although we usually camp in more remote places, I have to say, it felt special to be camping at Kelso. Removed from the day use area, we felt almost like insiders, like those other suckers had to leave, but we got to stay. One great thing about camping at Kelso is that it might not be remote, but it certainly is flat, even terrain. No bumps or rocks to have to deal with when sleeping in a tent = win. Unfortunately, the ominous clouds would not back off, and we had to cut our trip short due to the rain. It would be an understatement to say that we were disappointed to miss out on our Sunday escarpment hike. We’ve decided to have a do-over in September, to hopefully take advantage of a beautiful crisp fall day and perhaps even see some of the autumn colours.

Despite the rain, we had an excellent time at Kelso, and felt like we got to take advantage of many of the park’s natural gifts. Plus it’s always exciting to sleep in a tent, and we made s’mores, so another win.

By the way, my six-year-old has a new favourite game to play in the pool – she throws in these little sinking squid toys they have and then moves through the pool in slow motion towards it. The name of the game? Mommy’s Sinking Hat. 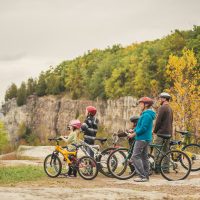 Become a Member at Oakville Galleries

Become a Member at Oakville Galleries

Craft and Tour at the Oakville Museum

Craft and Tour at the Oakville Museum

Wednesday to Sunday - 9 am to 5 pm. Exhibit is FREE with admission. Regular...

Bookings must be made directly with the Isabelle Reservations Team. Please e-mail to confirm your...

Bookings must be made directly with the Isabelle Reservations Team.